I want to first say how incredibly angry I am at this news. I think we all know what happened here. ScammerBlaster is taking the heat because a shit child—or a severely retarded young adult—put in a number going to AT&T Network Fraud into his dialer that’s only supposed to be used to wipe out Indian scam shops and proceeded to call flood AT&T employees with a 10+ hour long recording.

I know Tommy and I know that he is morally incapable of such a thing. Instead, what I am way more inclined to believe is that a piece of shit retarded child that abused Tommy’s trust put that number into SB’s dialer and then went to town with it.

For all of you who complained about BobRTC’s phone book and all the gatekeeping and banning you and your alts when you put shit phone numbers into the BobRTC phonebook–-THIS IS WHY BOBRTC WAS BEING MEAN TO YOU AND NOT TRUSTING YOU AND VERIFYING EVERYTHING YOU CLAIM.

And this gets even worse. Forget the one-hundred-million dollar fine. In the FCC’s own statement they now are trying to give legal credence to the term “TDOS” (Telephony Denial of Service). As you know the scammer lawyer that loved to harass this website and BobRTC—that is his favorite word. Nevermind that there is nothing in the Computer Fraud and Abuse Act that recognizes a TDOS.

But now the FCC is directly going after a scambaiting group, and it’s no stretch of the imagination that the FCC considers anyone engaged in raiding without a dialer to be TDOS’ing as well.

And scammers file FCC complaints. BobRTC got hit with 3 of them. An auto warranty scam, a Social Security scammer and a scammer impersonating Amazon all tried to dupe the FCC into taking enforcement action.

What makes you think they won’t go after your little Discord team, too?

Right before BobRTC closed down for good they had BluePhoneBuster, aka real name [redacted], trying to email-flood BobRTC, he’s on my suspect list for putting AT&T’s Network Fraud number on SB’s dialer and letting it rip.

And now the entire fucking scambaiting community will have to pay the consequences for it. BobRTC was working with AT&T Network Fraud (the same department that got flooded) to close off Social Security impersonators and AT&T also was the group that got the Federal Trade Commission and the DOJ to bring down Premium Techie Support.

But no, some shitstain who claims they are a scambaiter but instead are a menace to this community has hit the jackpot and stuck ScammerBlaster with a proposed FCC fine that’s a 9-digit dollar amount. And ScammerBlaster was not operating a scam, he was trying to stop them.

But no, you had to destroy him because that’s what you do.

I swear if I ever get my hands on you, you will spend the rest of your life breathing out of a tube.

Thanks man for the kind words. I too am without words in this matter. After what happened to your amazing platform and then now this situation it just feels like the scammers will always win and anyone who dares go after them will be the target of the telecommunications industry and the Federal government.

Thank you and to everyone for love and support and please do keep this situation in your prayers. I feel that, in time, this matter will pass.

My team is still focused and we are working hard to report scammer phone numbers and websites and are getting them shut down by the droves each day, and as long as I am breathing I will do what I can to fight this.

Good luck! You have our support. If there is anything we can do to help your matter, let us know.

Doxing someone when you guys prize yourself on safety. At least take his real name out.

Doxxing is not illegal ANYWHERE in the United States.

Since Nie-Gel was spamming BobRTC’s email, the BobRTC people changed their autoresponder to email back with his doxx over and over and over.

And it will be left that way, forever.

Fuck BluePhonebuster and anyone who supports him.

What’s the #1 Rule of Scambaiting? Do NOT fuck over other scambaiters.

This is bulshit it’s fucking sad that we have people like this.

God the chairwoman of the FCC is a dumb cunt. 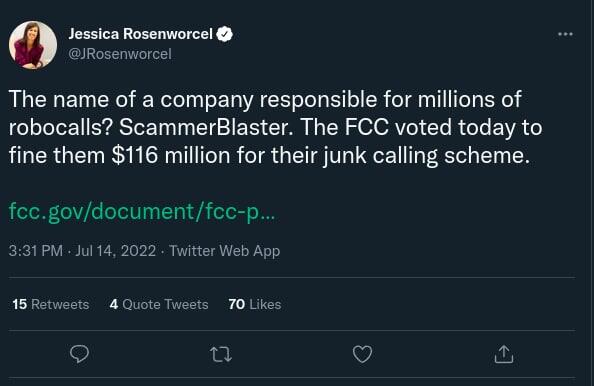 She makes people think she took out a scamdialer that calls consumers. ScammerBlaster floods scammers. He doesn’t mass dial people’s cell phones to sell them a shit claim-denied warranty scam or tell people with a robotic voice that he’s Amazon.

How many Amazon robocallers has the FCC bagged? The number is precisely 0.00

The FCC is basically sitting on their ass and @ScammerBlaster is being used as a patsy to make the FCC look good, like they are doing something.

The auto-warranty scammer they are so proud about that they mention in their press release is a serial FCC violator they already know about—and in that case all they did was a criminal referral and sent a memo to the RBOC carriers that it is OK to block the mom and pop VOIPs on a list who route traffic to them for the guy.

Meanwhile my phone rings and it’s a shitstain Indian saying my Amazon account has been hacked. For the 496th time.

The FCC should be eliminated and its roles given to the FTC.

Wish SB all the best. This is one of those cases where precedence needs to be set. Unfortunately SB will have to be the one to set it.

What about this? ScammerBlaster said it didn’t happen, the recording could of been fake so who knows as in it was taken else where and they made it sound like they were robocalled, I can’t confirm or deny this.

I am saddened to hear that the FCC could get this so very wrong. I can attest that ScammerBlaster is very rigorous with their investigations before targeting a scammer. If there was a mistake which got the attention of the FCC, then it is most certainly an innocent mistake. I am confident that any lawyer of avg competency can convince the appropriate adjudicators that the gov’t has accused the wrong entity.

FCC Official Press release explains a bit more than the website blurb:
*It still sounds like they got some major facts wrong, which SB’s lawyer should be able to correct on the record:
**official legal filing from the FCC: (https://docs.fcc.gov/public/attachments/FCC-22-57A1.pdf)
***please consider reaching out to SB with donations for his legal fees if you have the ability (my personal request…SB has not asked for donations that I have seen)

WASHINGTON, July 14, 2022—The Federal Communications Commission today proposed a
$116,156,250 fine for robocalls made in an apparent toll-free traffic pumping robocalling
scheme. The nearly 10 million robocalls were apparently made to generate toll-free dialing
fees for the robocaller. The law expressly prohibits robocalls – even non-commercial calls –
made to any service for which the called party is charged for the call unless the caller has prior
express consent or an emergency purpose.
An FCC Enforcement Bureau investigation found that, between January 1, 2021, and March 2,
2021, Thomas Dorsher and his company, ChariTel Inc, apparently made 9,763,599 prerecorded
voice message calls to toll free numbers. Businesses reported receiving unsolicited
prerecorded voice message calls that referenced an entity called “ScammerBlaster”. The
prerecorded messages mentioned the harms associated with scam calls and directed the
recipient to report such calls to government regulators, telephone carriers, and
“ScammerBlaster,” an entity that Dorsher controls.
The FCC’s Enforcement Bureau worked with the Industry Traceback Group to trace the calls
to Mr. Dorsher and ChariTel. Dorsher apparently targeted toll free numbers specifically with
his robocalls because he received financial compensation for every call made to a toll free
number. When a caller makes a toll free call, the toll free service provider—typically a long
distance carrier—pays the caller’s local exchange carrier for originating the call and for
performing the toll free database query. The called party—the customer who is assigned the
toll free number (i.e., the toll free subscriber)—compensates the toll free service provider for
completing the call.
When a LEC is engaged in access stimulation/traffic pumping, it will often share the
compensation with its caller customers to “pump” more calls across its network. Dorsher
apparently had such an arrangement with his LEC; in fact, Dorsher used revenue received for
making large volumes of robocalls to toll free numbers to cover the costs of another
robocalling scheme, in which Dorsher apparently used the OnTel Inc entity to proliferate the
use of telephony denial of service (TDoS) tools to debilitate the telecommunication systems of
entities he suspected of making illegal robocalls while employing inadequate verification
methods to confirm that was the case. The Department of Homeland Security’s Cybersecurity
and Infrastructure Security Agency (CISA) has stated that TDoS events present a unique
challenge to public safety stakeholders and can severely impede a jurisdiction’s ability to
provide emergency response services.
The proposed action, formally called a Notice of Apparent Liability for Forfeiture, or NAL,
contains only allegations that advise the party (Thomas Dorsher, ChariTel Inc, OnTel Inc, and
ScammerBlaster Inc) on how it has apparently violated the law and may set forth a proposed
monetary penalty. The Commission may not impose a greater monetary penalty in this case
than the amount proposed in the NAL. Neither the allegations nor the proposed sanctions in
the NAL are final Commission actions. The party will be given an opportunity to respond and
the Commission will consider the party’s submission of evidence and legal arguments before
acting further to resolve the matter.
Action by the Commission July 14, 2022 by Public Notice (FCC 22-57). Chairwoman
Rosenworcel, Commissioners Carr, Starks, and Simington approving. Chairwoman
Rosenworcel and Commissioner Starks issuing separate statements.

Thank You, the Bob-Mods, and the rest of the team for letting me share your service to hurt the scammers. Your service will forever be missed.

I think it’s time I speak up. Like a year ago everything seemed to cool down between SB and him. Used to be friends with BluePhoneBuster. He had also personally invited me back in 2020 to his private server and I got to listen to scambaits and even joined in baiting scammers with his team on his server. Dude also had his own PBX to flood scammers which he later shut down due to financial crunch. He had kicked me out of his server once for being in Scammer Blaster’s server, before things cooled down and I was back. Had gone into inactivity for months in 2021 and came to know from one of his friends that he had not only deleted the server but also his original account then. I keep myself out of all sorts of shit going around, including politics but the fact that he’s being held responsible for the FCC fine on SB is pretty hard to digest for me. Feeling betrayed that he let the entire community down.

I’ve always loved and the most supportive of what I call the ‘red hood’ style of scambaiting which involves call flooding, destroying /manipulating scam tools, computers and other devices, exposing scam call centres and scammers themselves on one side and contacting and simultaneously saving victims and promoting scam awareness.

I hope the scambaiting community is not impacted by this and we continue to raise awareness either by Youtubers, forums, etc.

Scammer Blaster is a wonderful amazing brilliant person. A true unknown hero like so many other epic people who are also scambaiters. Absolutely selfless heroes/heroines. Standing with you Blaster!