WARNING: Do not interact with this person

I don’t know why “CoryResilient” feels the need to send me his schizophrenic rants, but I cringed half way through and couldn’t finish reading this latest one.

He’s either suffering from little dick or main character syndrome. I gave him a chance to stop being a moron but he decided to attack me again even though I’ve said nothing to him.

I don’t know what profit he is talking about since this site barely makes enough to cover its server costs lol. 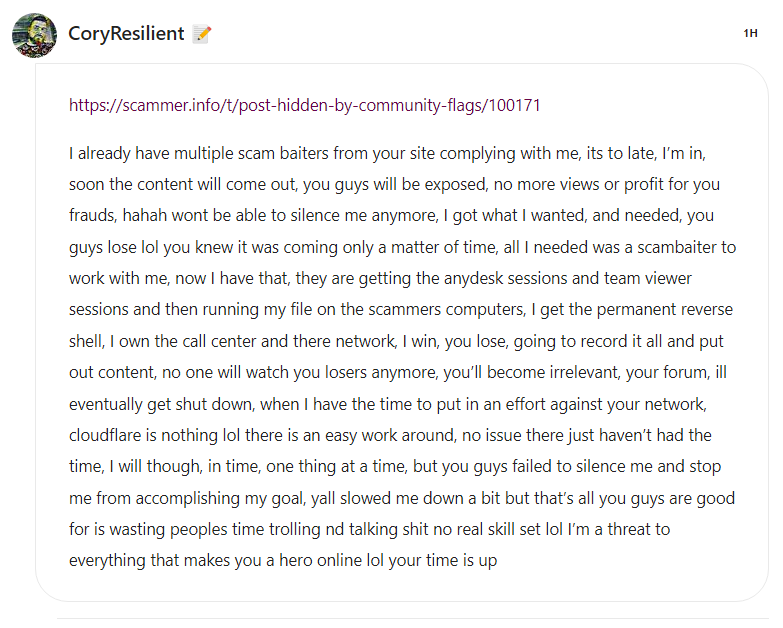 “cloudflare is nothing” my ass 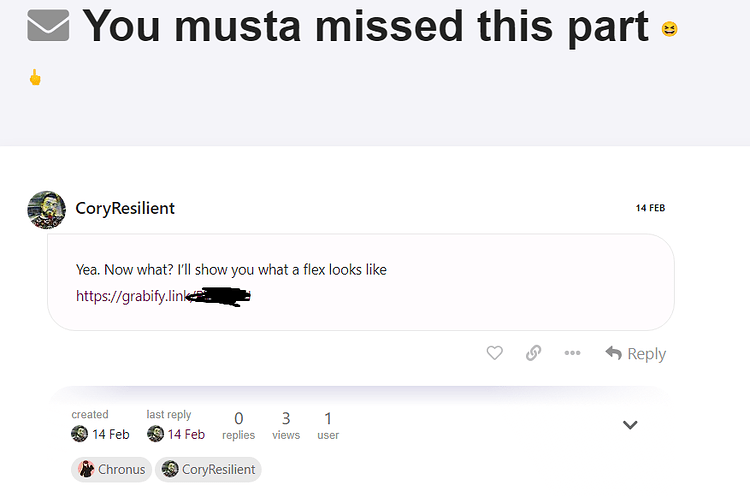 Yeah, The dude needs to take a chill pill

I had no idea a 300 word, single sentence, running rant was back in fashion.
If my grade three teacher had seen anything like that, with its seemingly endless array of grammatical and spelling errors, she would have turned purple and quite possibly spontaneously combusted.

Reading the scholarly genius musings of too many 419 scammers, obviously has had a detrimental affect on those 3 active and semi functioning brain cells.

Is my this guy stupid or something?!

He’s either suffering from little dick or main character syndrome

Could probably add ‘Bible thumping drug addict conspiracy theorist’ to that. He seems angry nobody in the popular arena of scambaiting wants to “work with him”, so you should feel complimented that he holds you high on the pedestal level enough to cry at you.
He has already cried “nobody wants to play with me” on Twitter: 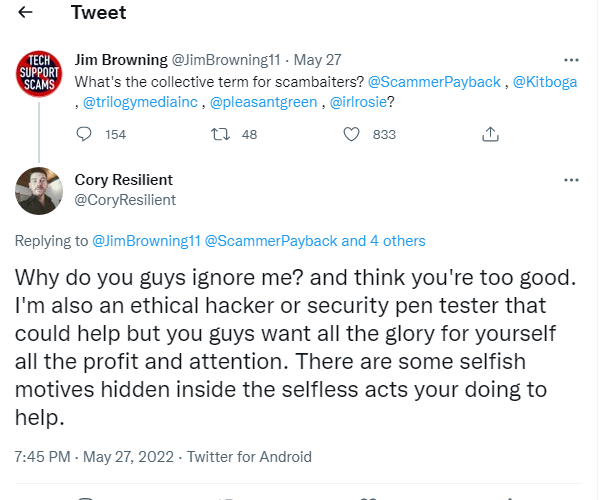 @CoryResilient
@JimBrowning11@ScammerPayback@Kitboga@trilogymediainc@pleasantgreen@irlrosie Why do you guys ignore me? and think you're too good. I'm also an ethical hacker or security pen tester that could help but you guys want all the glory for yourself all the profit and attention. There are some selfish motives hidden inside the selfless acts your doing to help.

It was a reply to Jim Browning, who was asking a general question to some other popular scambaiters and didn’t have anything to do with him.

Genius idea: work with the scammer.info community to more effectively gather info from the breached machine in question, instead of spurring out this for whatever reason.

Sounds like the kid needs “a trip to the proctologist to get his head examined”!

My guy has no brain cells. He needs to chill.
He didn’t even try to spoof the grabify.

thank you thank you, i love the work y’all do!

Another interesting fact. I don’t think Cory’s picture is himself. I’ve seen very very similar images though with different outfits via reverse search.

Ugh, You are correct in your statement

I don’t think Cory’s picture is himself.

Yeah, it is him. He has a pic on Facebook wearing the same shirt and the background of the room is the same layout. He just took a bunch of selfies and one of them he used a photoshop filter to “cartoonize” it.

Schizophrenia confirmed. He thinks he is worthy of gangstalking, what a deluded freak. If he even tries to get popular we have all the evidence here to expose him… and what does he have on us? Just a bunch of crazy theories with no merit to them. 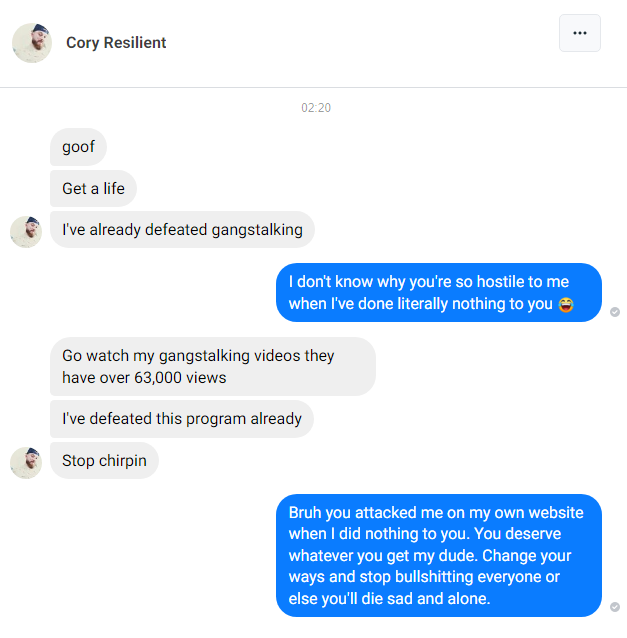 With all due respect, I think this person should visit a doctor ASAP .

I saw his YouTube video convincing a 14 year old kid A from Nigeria to download malicious app to his phone until I felt sorry for that kid instead of teaching the kid something useful, he made f youtube video .

I visited his YouTube channel and he claims to be the chosen one , and even when I spoke to him politely, he started swearing at me and telling me that you wouldn’t be able to stop me , I’m the chosen one … I born to do this and something like that , anyway he’s gonna made a rap song about our forum and he promised me that he gonna hack our forum

I found what his problem is with scammer.info, he has one video on his “scambaiting” youtube channel (Scammers Exploited) and it is about why he is having issues with scambaiting: 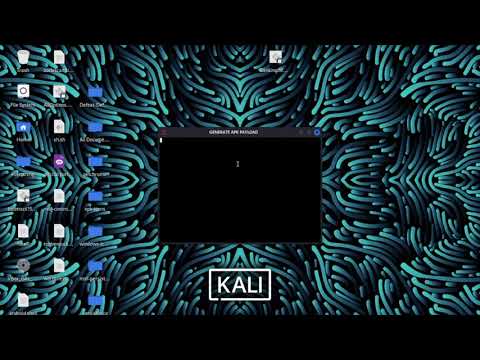 GIRLL, this moron looks like that and they me Crazy (I am crazy tbh lolz) & Ugly?!

Ugh, Humanity will disappoint me.