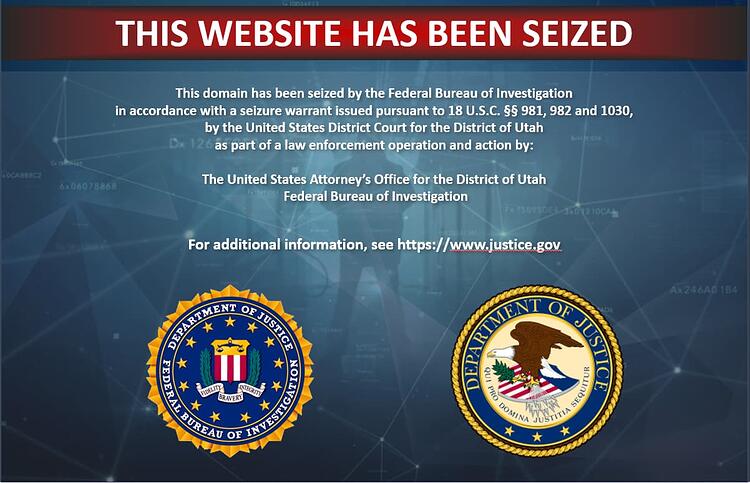 The feds are down to business I guess. FCC should be ashamed.

I just tried to call him and his number is ‘no longer in service’.

With BobRTC and scammer blaster down, this is not a good thing for innocent victims.

I have 2 neighbors who are retired FBI (still very young) and they both said it’s become such a hypocritical & political BS agency. They could not tolerate the unfair crap any longer.

I doubt this is a real seizure, the red lines kinda make it seem fake as fuck to me

It’s official and as crappy as ever. Jessica saying he’s calling legit ppl when scammers.
He would want all of us to stick together and report numbers via e-mail. I’m gasping over how fucking stupid the Government is

No, that is not what they are saying at all. They are saying he pulled a scam called “toll-free pumping”, where he robocalled businesses with his “advertisement” as a public service announcement to their toll free numbers without their consent, which is illegal.
When you call a toll free number, it gets charged by the local service (ChariTel in this case, owned by him) you call from and the fees are billed to the toll-free service providers, which in turn charge the business owners the fees.
He might be a hero to everyone in the scambait community, but not so much to all the businesses that were victimized by paying those toll free charges from those unwanted robocalls.
Everyone keeps overlooking the issue and making it into something else. Sure it is unfair the scammers get a win out of scammerblaster being out of commission, but a scam is a scam and no scam is “OK” to be allowed.

For those of you who don’t get it, here, he even had a conversation with someone victimized over it and just played it off like it was nothing. 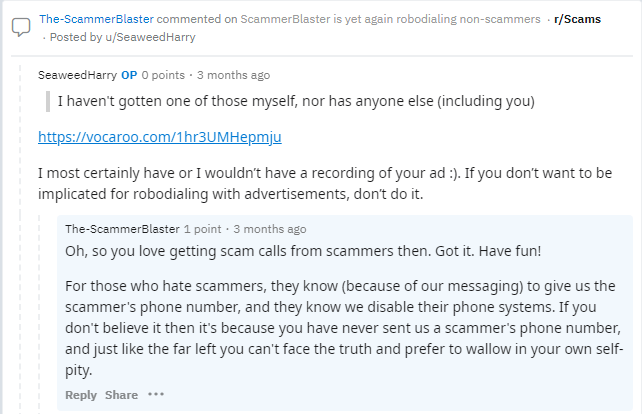 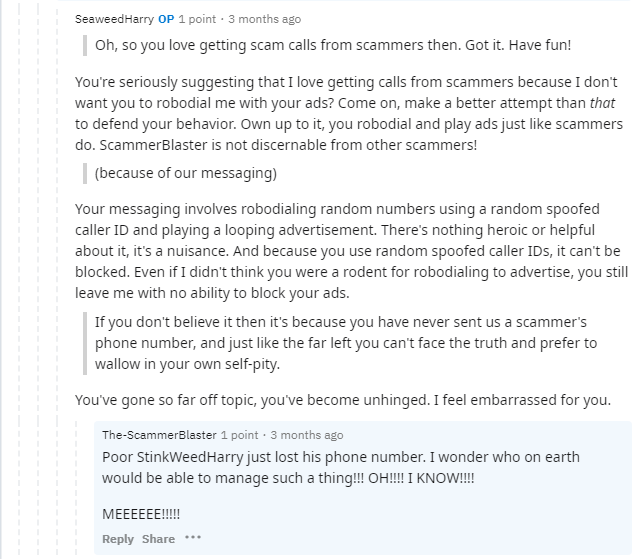 Here is the sound clip:

I hope the best for him and that things work out for the better for everyone.

I know first hand that the numbers SB floods are have been vetted and verified as scammers. This whole situation proves that the U S government would screw up a free lunch.

I have no doubt the numbers he call floods are to scammers, but again, this has nothing to do with those. These weren’t call flood victims, they were robocalls, same type as scammers and telemarketers make. It was a message that was played in a loop and one was reported to have played for 10 hours.

Don’t get me wrong, I think the call flood service is essential to help combat scammers, but I am just pointing out what the FCC thing is about. Comments seem to think he was soloed out for call flooding scammers, when it is not what this is about. It is an entirely different thing.

I stand corrected, I had understood it that this whole situation was brought on by the toll free numbers used by scammers. I hope SB makes it out of this and can get back to flooding scammers.

BobRTC was aware of the toll free pumping scam and put in limits, the most important being a call duration limit, so the accusation of pumping is hard to stick, much less detect.

I mean you can make the claim of pumping with a 5 minute call duration but when it’s 20 users with 1-4 calls going to a Social Security scammer renting out a toll-free number, the entire purpose of making the calls is to take that scam offline and the pumping claim falls apart when the “victim” in this whole thing is an Indian with an American money mule committing a Class 2 felonly using the toll free number.

But Bob wasn’t built to pump toll-free. It was built because FireRTC went the way of the dodo and there were no decent tools to get new scambaiters started.

Either way it doesn’t matter anymore because the FCC has essentially declared war on scambaiting so it’s good reason to retire if there ever was one. Scambaiters threw cold water on a raging inferno going on in the telecom network for the last 5 years and we have saved potential victims hundreds of millions of dollars of losses.

Let the FCC manage the problem like they normally do: by ignoring it.

The whole story is on the FCC.gov

Yes I know, but it would seem people are confusing call flooding scammers toll free number to robocalling legitimate business with a “PSA” message in a 3month period, which is NOT the same thing. I am sure some of those toll free numbers were to scammers, but I seriously doubt the calls to the scammers toll free numbers were merely a PSA message. He has been call flooding for several years, so why only the 3 months?
Many of the reported complaints were legitimate businesses. In the above screen shot from reddit, he denied having any PSA message until it was posted, then he changed the story.

Yeah, it seems like if this actually happened an error would be returned instead of a flashy screen

Thanks everyone for all your kind words and concern for me.

The FCC has it ALL WRONG!!! And if anyone actually thinks that the FCC got this matter right then let me also send you an “official” email that your Norton Lifelock has been auto-renewed for $499. Is the government really that infallible? I suspect that @MKHNT thinks so, but I could be wrong.

I suspect that @MKHNT thinks so, but I could be wrong.

Our Gov definitely has some problems and I believe in your cause against scammers. I just posted what they are saying to help clarify to some of the comments that missed the point of that Proposal. I saw that reddit conversation and gives a glimpse of what the Gov probably saw too. You have a way with words and it seems like you didn’t care if a legit business was called because they didn’t give you scammer numbers to call flood. Was I wrong about what you said?

You know me, I just collect data and report what I find.

Understood… I was just unclear regarding your intent. Thanks for clarifying. We received 400+ reports per day, prior to being shut down. Only half of those reports were actionable. That means the other half were either junk reports or to legit companies. But, we ALWAYS verified if a number is legit or not. I feel bad that legit companies will get a test call from us on occasion, but it is hardly a crime, nor does anyone with a toll-free number actually “pay per each individual inbound” call, which is just another absurd and incorrect FCC claim. I always Google a number first, and many times I can see that a number belongs to a legitimate party and don’t even call it. However, many times there are no search results and that’s when verification is involved.

One or two comments over Reddit isn’t of concern to me though, nor is that of any usable evidence by the government. My team knows what we accomplish, as do countless individuals who relied on our FREE service to help them with scammer issues. If the government chooses to make the mistake of using that as ‘evidence’, I would be able to bury that in over a million pages of proof that only the opposite is true.

This is not me claiming to be above the law… no, not at all. However, my intentions have always been, and always will be, honorable. This is also true of my amazing team and thousands of scambaiters everywhere. Ultimately, that’s what it’s all going to come down to… Intent.