Scam Number: 8025411760
Scammer’s Website or Email: Scam email.
Additional information about this scam: This came to me by email. When I called them, the man changed his voice to a woman’s voice, and he said I would have to go to my computer. He hung up when I started climbing up the stairs. 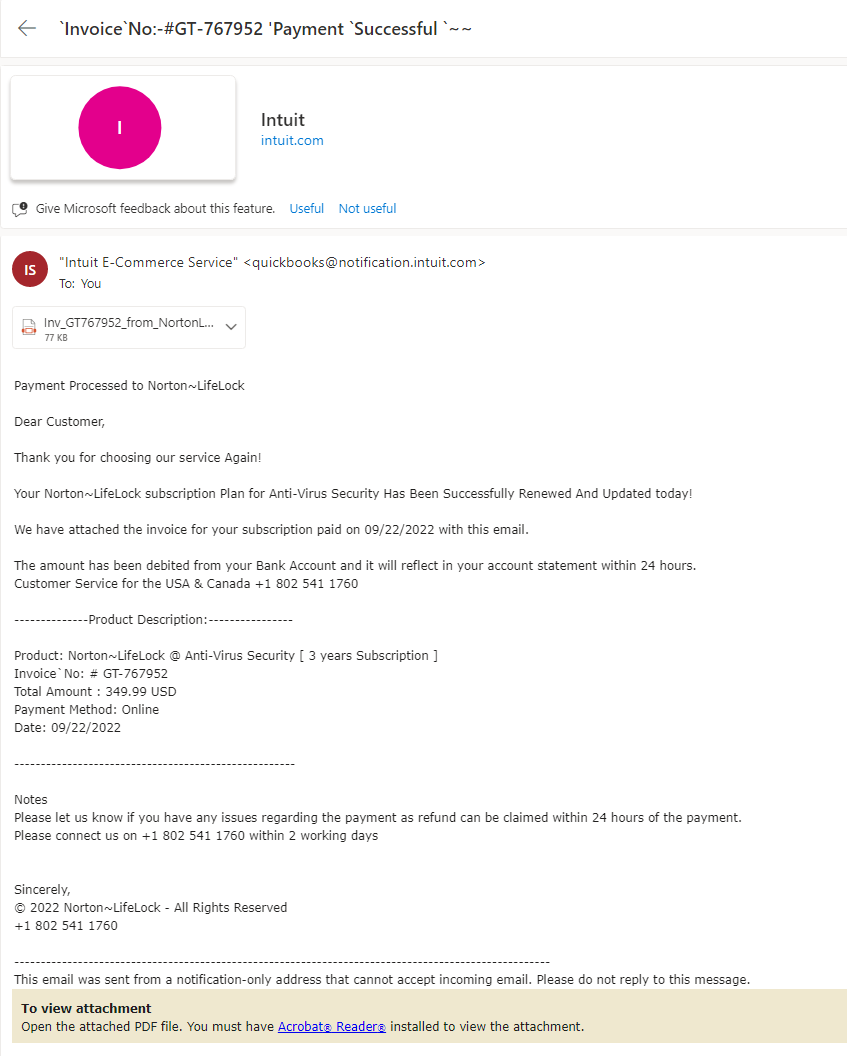 Second call, guy wanted me to go to “QS” on the Android Playstation.

Yes Sir, I am on phone now

Okay, the “Mark Alfred” at “Norton” wasted about 10 minutes of his time without trying to get on my computer before he stopped being able to hear me and he therefore hung up. I was reading to him the email per his request, though intentionally I was fumbling around with my words and dragging it out.

So then he called me back from the CALLBACK NUMBER (810) 213-2508. I did not answer this call coming into my TextNow number because I was still saying that I can hear you but I was asking him if you are still there. So I called him from my TextNow number at his CALLBACK (810) 213-2508. He answered with only the one word hello. I said that I received a missed call from this number and asked from what company he is calling, and it sounded like he said “Champs” as the company name. I said I was not speaking to anybody from “Champs” if I understand what you said correctly. He said, “You called me though.” I reiterated that I indeed have called back this (810) 213-2508 of yours because you called me while I was on the phone with another company and that on that other call the man stopped being able to hear me. He said, “Oh, that was me. I am Mark Alfred from Norton. I stopped being able to hear you and therefore I called you from this personal number of mine.”

So on the call to CALLBACK NUMBER (810) 213-2508 that lasted 20 minutes, I’d said that I got the email and gave him the amount per his question. I said that my Norton subscription does not expire until 2025. He asked me how many subscriptions I have. I said I have only one for me since I have only one Dell desktop computer from 20 years ago and I need only one subscription since I live alone. He said that he sees that I have TWO subscriptions. I asked him what my name is. He said he cannot see my name because I am calling from my landline phone number, which is false since I was on my TextNow number. I said that there is no problem though because I have called the company of the only credit card that I have and I told them not to accept any charge for $349.99. He said though that I have TWO subscriptions. I reiterated that I have only one. He said though that I could get charged to renew the SECOND subscription for $349.99. I said AGAIN that I already informed the credit card company of my only credit card to reject ANY charge for $349.99. Basically, we never got to him trying to get on my computer because we both kept going around and around. I do not have a 2nd subscription and therefore I am not renewing a 2nd subscription AND also I am not renewing in 2022 my ONE subscription since it does not expire until 2025. (Currently I do not have a Norton on my laptop but in the past I have had it.) But you will be charged the auto-renewal for the 2nd subscription! I have called the credit card company of my only credit card and have told them to reject ANY charge for $349.99. After 20 minutes of going round and round about the same thing on his CALLBACK NUMBER, he hung up.

These criminals obviously do not “think through” the possible responses of potential victims.