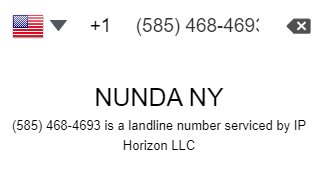 Scammer called me on a recorded line to ask if I had at least $5,000 in debt and if my household earns at least $15,000/year. Once qualified, they will redirect your calls to Jerome from the “Consumer Council.”

There are thousands of numbers out there with this same thing on them in every area code.

I find them daily during unallocated number block searches
There’s so many scams are in these areas that don’t have any citizens or businesses other than the scammy student loans/tax relief/ these things/ free solar panel quote/ IRS tax debt forgiveness/ loads of numbers all with the same menu offering cash settlements for your home.
There are literally hundreds of things only the victims these shitheads robocall with the thousands of usually consecutive numbers.
I found 1942 consecutive numbers with the same scam ivr menu on them, then this same thing can be found in every other area code on many thousands of numbers
I know of dozens of things out there designed to aim slightly higher than the extra zero refund nonsense

I just grabbed a sample of the many thousands of this same thing which is out there my dialler searches pick up all the time.