This works only if you have a US phone number!

If you receive robocalls and telemarketing calls, you can actually cash in on them because they're breaking a couple of laws, among others, the Telephone Consumer Protection Act (TCPA). By scambaiting them, doing research on the spam callers and then litigating and offering a settlement, you can actually make up to $1,500 per call. It does work, I've tried it.

Learn how to do that in my video: 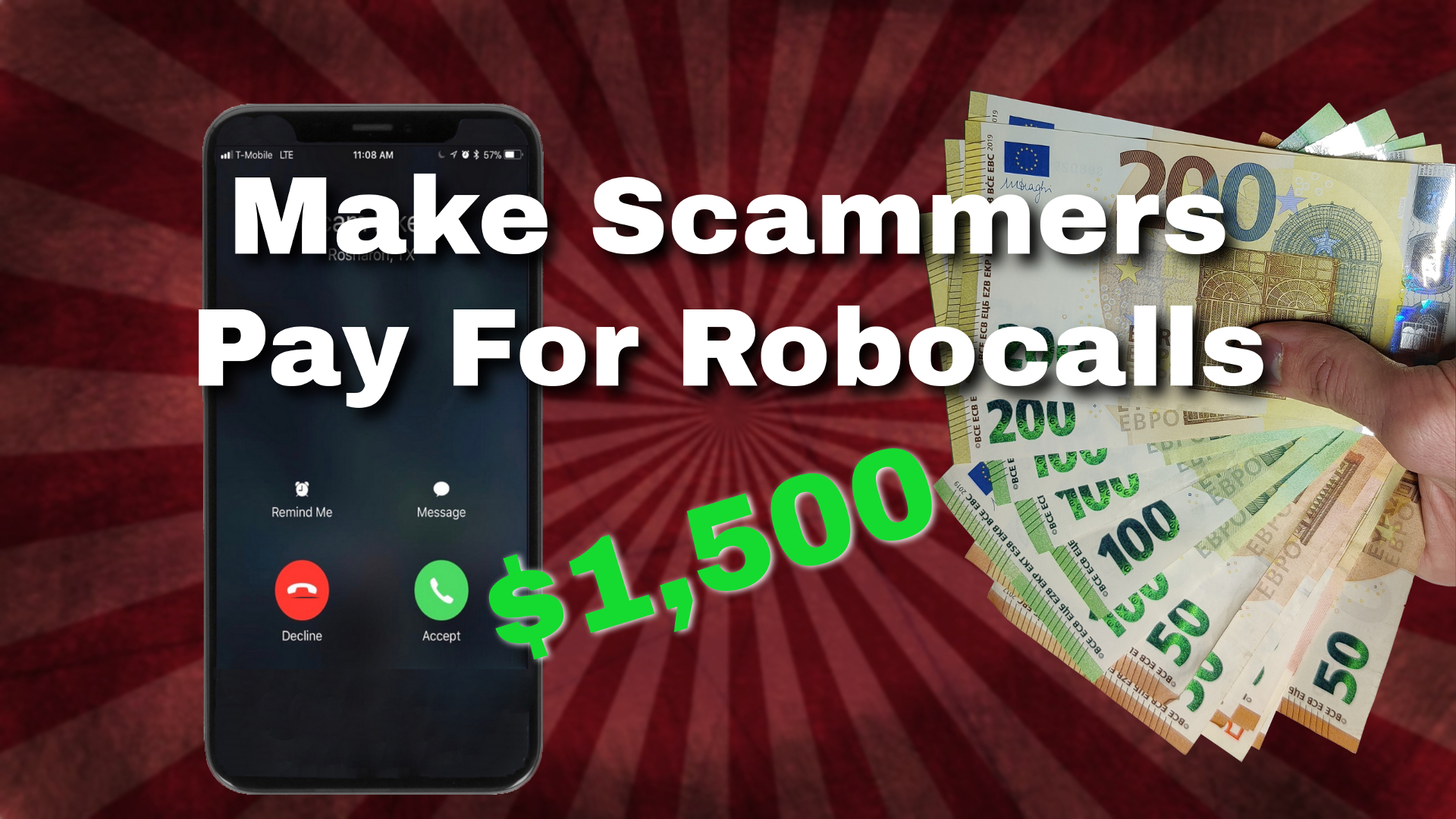 @FattyMatty#170100 Woah nice, that’s a lot of money. When did you start? That is pretty quick.

Can this be done if you don’t live in the US? A US number is not exactly hard to obtain.

@NeeP#170125 I bought Doc Compton kit and joined his Facebook group. In my opinion that’s the way to go. The group has great resources for demand letters, users experiences abs strategies. The real key though is to have inside access to a law firm that will accept TCPA cases. Most people will find That a small claims court victory is essentially worthless financially because it’s nearly impossible to collect. The law firm gives priority treatment to his group members because it already tells them that you have done your homework and you have a good documentation.

The problem is also that very few law firms practice consumer law and getting one to represent you typically requires a large retainer. Moreover there are several state courts that don’t recognize jurisdiction for the TC PA and won’t even hear the cases or summarily dismissed them without hearing the case. I highly recommend that people who are serious about going after TCPE violators use his group (which you have to apply for by the way on Facebook).

Another great feature of the group is that people compare notes to find out who the resident agents of the company are, emails, phone numbers, and other intelligence that would be impossible to come up with and less you spent your entire day working on these things.

@Foreign_Hacker#170171 no the Telephone Consumers Protection Act is a US law. No jurisdiction anywhere else

@FattyMatty#170190 Most people will find That a small claims court victory is essentially worthless financially because it’s nearly impossible to collect. The law firm gives priority treatment to his group members because it already tells them that you have done your homework and you have a good documentation.

I think it's exactly opposite to that. Law firms cost money whereas in small claims court / if you represent and litigate yourself you have zero legal expenses. I've heard cases about TCPA law firms that settled with companies on your behalf and only gave $500 to the consumer while chugging the rest of the $1500 settlement. I guess it makes sense to use a law firm if you have to deal with a huge robocaller such as Dish Networks and their $210 million settlement (https://www.reuters.com/article/dish-network-settlement-idINL1N2IK23P).

That's also the beauty of TCPA litigation: you can waste the robocaller's legal money as well. I sat like 2-3 weeks with the lawyer cuz he put a bunch of typos and mistakes in the settlement agreement which we corrected. He spent quite some time with me, burning his client's cash, whereas I didn't have any fees whatsoever.

@Foreign_Hacker#170175 Examining the Strategies of a TCPA Litigator

> What Is a Professional TCPA Plaintiff? | Tatango

Interesting articles. So the verdict I guess is: don't exaggerate, don't buy tons of numbers. Keep it real, maybe 2-3 are enough, keep them on the National Do Not Call list and litigate outside of the court. All the arguments brought up by the courts which were negative to our position can be avoided by settling the claim with the robocaller before it reaches court. So there it really doesn't matter as long as you approach them well enough for them to rather settle than to fight in court.

@NeeP#170222 so you win a default $1500 judgement on small claims court. How do you collect across state lines? Going through that process itself is very difficult. You are correct that contingency fees on a TCPA case are expensive. The firm we use charges 50%. The hard part isn’t winning. The hard part is collecting

Good day to be back …been away from my home now I’m back for while. Happy to see neep still here dude been fighting the good fight since bobthevirus …the great and often mysterious drwat and markiemm the overlord. Can anyone tell me what happened to markiemm why we disappeared lol

@FattyMatty#170260 I have no experience with collecting money from a won court case. Why should that be complicated though? I imagine the court orders the defendant to pay the amount of money to the plaintiff. Then it would work just as any settlement, sending by wire transfer or check. My goal is anyway to settle without taking it to court as it’s the easiest and most profitable option. If I have to give 50% to the firm, I don’t know if it’s still worth the hassle.

I have one case though where it definitely makes sense using an experienced law firm. I've caught a big US insurance agency named AllState to use a Filipino call center to robocall people on such a massive scale that even the Texas Department of Insurance officially warned about the Filipino call center (they didn't know that it was AllState though). AllState and the Filipino robocallers definitely work together as all data I've given to the Filipinos was available to the American AllState employee right after the call transfer so they must have electronically shared information. More on that here: https://scammer.info/d/27990-consumer-insurance-association-scam-202-318-5444/

Yeah of course the preference is to induce a settlement…no dispute there. But collecting on a small claims win is much more difficult. A court win does not force the loser to pay. In the US a small claims court winner walks away with an enforceable judgement but that judgment is difficult and often impossible to enforce.

First you have to go through the time and expense of attaching to assets of the other party. That can often involve an expensive asset trace by a firm that does that. Then if you discover that they do have assets, you have to serve papers on them to enforce the judgement. If the case is worth thousands of dollars (and many times they are) only an experienced law firm can makes this happen. Trying to enforce a small judgment by yourself is very difficult. I wouldn’t give others the idea that it’s a clean process. It’s anything but.

If there are any attorneys or paralegals among our brethren I’d like to hear your opinions.

@FattyMatty#170195 Foreign_Hacker no the Telephone Consumers Protection Act is a US law. No jurisdiction anywhere else

@NeeP#170222 Interesting articles. So the verdict I guess is: don’t exaggerate, don’t buy tons of numbers. Keep it real, maybe 2-3 are enough, keep them on the National Do Not Call list and litigate outside of the court. All the arguments brought up by the courts which were negative to our position can be avoided by settling the claim with the robocaller before it reaches court. So there it really doesn’t matter as long as you approach them well enough for them to rather settle than to fight in court.

I got the impression that it's OK to have a heap of numbers, as long as it's possible to prove some kind of legitimate use for the phone, an to have a convincing argument as to why the call is still a genuine nuisance.

Why do I get the sudden feeling markiemm was a double agent …I was going after a big american scam for weeks…sundancexxxvacations…then suddenly my decoy phone get pinged from there lawyer. Only markiemm and Phil knew me …I always thought they were the same people …ala Edward Snowden mode

I really got up to speed by joining Doc Comptons

@Foreign_Hacker#170296 you can have as many phones as you want. Who can question their legitimacy. However this does not apply to TextNow or Google voice voip type numbers. These don’t cost you money for unsolicited contact. The whole reason that the TCPA exists because Robo collars were calling people were contacting them without their consent and conceivably it cost money per text message or per phone call. I have a sneaking suspicion that the TCPA may be rendered irrelevant in a few years if all cell phone companies go to unlimited plans. In essence then an incoming call would not cost you anything whether it was wanted or not. That’s just my half ass opinion though.

One point to consider also is that as long as you aren’t on the do not call registry this applies to landline phone numbers as well. The only exemptions are political action committees who are often just professional fundraising organizations disguised as benevolent societies helping police and fire benevolent organizations, ex military personnel aid organizations and other charitable organizations.

The one Carve out our political action committees. I recently sub with one because they called on my cell phone three times and I busted them. Often times these are legitimate organizations performing illegitimate fundraising. That doesn’t make it illegal it just makes it sketchy.

Finding relevant information on US companies is actually pretty easy through the Secretary of State where the company is registered. You have to be a bit of a social engineer to extract out Of the customer service reps but it can be done. I have seven or eight demand letters out to various organizations because of illegal Robo calls that exceed $18,000 in propose settlements. That doesn’t mean I’m going to collect a penny but from what I have seen the majority of them do want to settle.

Just don’t be misled to think that even if you win a default judgment because the other party doesn’t show up it doesn’t mean it is easy to collect on that judgment. It’s often quite difficult if not impossible without the resources of an attorney

@Foreign_Hacker#170296 There is no limit to the number of phones you can own. The problem is obviously monthly costs involved. However, the TCPA does not apply to VOIP services like Text Now or Google voice, etc. The reason the TCPA even exists is because people could conceivably have to pay money per call or per text message. You have been “damaged” in terms of financial outlay for each unsolicited contact.

The same holds true for landline calls. Telemarketers cannot contact you on your landline if it is registered on the National Do Not Call Registry. However, there is a carve out for Political calls including Political Action Committees. There are numerous benevolent sounding groups related to Police and Fire organizations, military personnel support or other benign sounding organizations. If they call your landline, there's not much you can do. If they call your cell phone, all bets are off.

Let me know if you need any help.