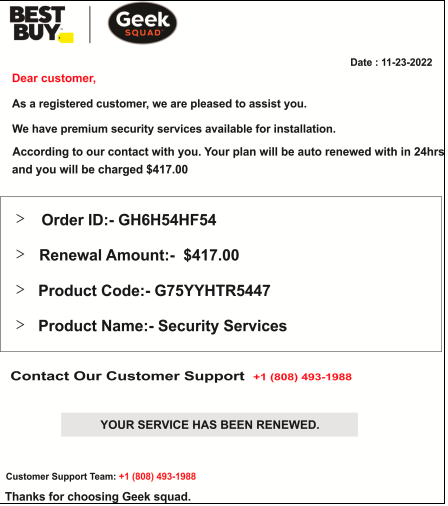 Yea, I got them mad enough that they were yelling, “Don’t call us back”. Now they aren’t even answering.

No answer here either. It means we won the battle.

And they are seriously pissed off. They guy in the background when I called back just now was yelling so loud I couldn’t hear the moron I was actually talking to.

New number. They just accidentally called me back from (808) 493-1864. They answered it ‘Thank you for calling Geek Squad’. I said that I was returning a call, they sounded confused for a minute, then said “F*** you and hung up”

they answered to me. i am now kindly wasting their time

we have won the battle, but the war isn’t won yet.

Had me run Cmd & Assoc to bring up CLSID and claimed that “computer license” was linked in to my subscription, LOL. I of course enlightened him, in a unique way of course, to the myth of that possibility.