image1430×110 9.26 KB
Has harassed me 12 times already. TWELVE! For some reason, textnow only sent 4 instead of 12 missed call emails. Smh. Unbelieveable!! No voicemail or text messages left behind identifying the calling party in any way. 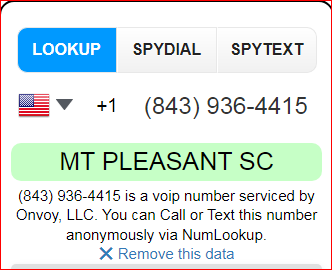 TextNow - Bot says number not in service, either I’ve been weirdly already blocked or the number’s just been temporarily taken down or something… On my Talkatone, 3 ring hang for me.

Rang twice, then hung up

UPDATED! @Draco @TheMikesman @scamterminator2021
Got a call last night somehow from same number… turned out to be those idiots who claim to help you with the debt shit, the 60:40 ppl I believe, whispered I was at work randomly as I couldn’t talk - lady said she’d call me back, still hasn’t.

Welcome to the community @TheMikesman

Rang twice, then hung up

Your number is blocked

Your number is blocked

How??? They still managed to call me although the bot originally claimed the number was OFS (Out of service) which clearly isn’t the case, even when calling from a completely different number.

They fake “out of service” temporarily

I thought that was the case! If you look at one of my earlier comments, I did assume a possible thing going on was the matter of fact the number was only being randomly taking down temporarily! Thanks for the comfirmation.