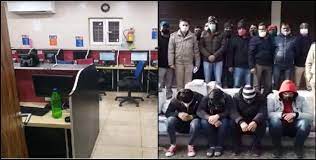 UDIT GARG is the main culprit. One guy named Manu Chawla in 2022 Feb 3 indictment is his working partner. Police found around 13 mn INR during Raid. Sad thing is they will pay more and run away from the same.

And guess what, after the press attention has dies down, they’ll release them on a ‘bribe’. They’ll arrest and then get promotion. It’s just like destroying a sinking boat whilst allowing the occupants to escape safely to another boat. In other words, scamming again. I’m an indian and I know what shit goes behind the scenes. I don’t hate my country but I very very deeply hate these scammers and their supporters/facilitators and the damage they cause to the country’s reputation. (Faced racism because of these scams)

Thank you for your service sir. The evilness of scammers has caused otherwise kind and caring souls of MANY Nations to even commit suicide. As it is written this all is but for a day. Also, it is said ill gotten gains do you no good in the end. I think they will pay with their souls when they die. But I applaud you for your caring nature and understanding of the destructiveness of these scammers and others operating all over the world. It reflects well on your family heritage and is worth more than gold. You are a HERO.