To keep it simple, YouTube has suspended my account because I use it for scambaiting stuff. I’ve appealed, multiple times in fact, and I guess they couldn’t be bothered to really look into it. I don’t even post scambaiting videos, or anything similar to that nature.

I use YouTube basically to stream scammers’ screens so that I can easily share it with friends (and intercept ongoing scams as needed), as well as for recording purposes, and the ease of rewinding what just happened while watching live. All of these streams were unlisted, none of it was ever set to public. However, YouTube decides that these are against their community guidelines, and they don’t seem to bother trying to understand the context behind these videos. It may be the phone numbers / private information that showed up in the videos, or they might think I’m trying to advocate teaching people how to scam with these videos, I don’t know. I’ve tried to reach out to the @/TeamYouTube Twitter account as well other than filling in their appeal form.

.@TeamYouTube It's disappointing as a Premium customer that YT is literally unusable for me now. I have wrongfully suspended,appealed, got unsuspended,then resuspended a day after.

Can I talk to an actual person on YT? You set a 1k word limit on the form yet don't allow replies. pic.twitter.com/XwW7njKSVT

Heard back – we've reviewed your channel & the decision on the suspension stands due to repeated/severe violation of our Community Guidelines. Note: You won’t be able to access or create any other YouTube accounts. Also, you can learn more about this here: https://t.co/OXe5kjvdro

It is honestly pretty unfair that my account that is created so long ago, ever since YouTube still has the tagline “Broadcast Yourself” and is not owned by Google, got suspended just because of my four months worth of unlisted scambaiting streams, that is meant for the sole intention of me and my friends. When some of my videos got the strike, I didn’t bother appealing, given the questionable nature of these videos I wanted to avoid any attention or trouble, plus I never thought it could lead up to this situation. After all, I’ve never gotten anywhere more than the first strike.

Appealing worked the first time (refer to chronology below), but I get immediately suspended just a day later, under a different reason. I’m not sure if it’s their AI at play again, but I’m inclined to think that my account is probably marked as having a second suspension or something like that in YouTube’s trust & safety team’s portal, even though both suspensions are literally a day apart, but I could be seen as a repeated offender, which may explain why all my subsequent appeals fail.

It’s honestly sad that YouTube don’t see the severity of actually suspending an account. Yes, suspending and unsuspending is probably just a click away, but I doubt they understand the impact of it. Actual spam accounts obviously wouldn’t mind, they’re always prepared to throw their accounts and start a new one at anytime soon anyway. But it’s my 10+ years of viewing habits in there, all the recommendations, watch history, subscriptions, catered to my taste. The comments I’ve made, likes, dislikes, the videos I’ve uploaded. These, in addition to all the months worth of lost evidence regarding the scam. The account is also subscribed to YouTube Premium family plan, but despite the memes about how YouTube only responds to enquiries on Premium subscriptions, this doesn’t seem to affect their decision.

I know it’s petty to bug anyone about this, especially I’ve seen how people basically spam reply Tweets under company support accounts about their suspended accounts and the likes. But it does mean a lot to me. YouTube is actually barely usable for me right now, a lot of things are broken when your account is in this weird suspended state, and I currently have to watch YouTube on incognito ever since. The YouTube phone app completely dies. And YouTube asks that people who have been suspended to not create a new account, which I don’t think is a good solution for me neither, considering that there’s other Google services I use that is bounded to this account, like Drive and Photos. Essentially, it really boils down to that I either clear my name, or I’m no longer welcome to YouTube, at all.

It’s not a good defence, but I know that Jim does unlisted streams in a similar fashion as well. He has enough trouble dealing with people DM’ing him for help, so I won’t try to add to the mess. But as petty as it sounds, I still hope someone can help get YouTube’s attention. YouTube sets a 1000 character limit on their appeal form, doesn’t take into account any additional context I’ve given on Twitter, and there’s no other way to reach out to YouTube, Google, or the trust & safety team in general. They’re just this large entity that I cannot effectively communicate in any way, actually has some form of control over my life, and makes me oblivious to it until they decide to take this privilege away. I just hope I can use YouTube normally again like I used to, and probably let this be a lesson to anyone that may be using YouTube for a similar usage.

Words don’t mean much, so if any proof is needed that I’m actually suspended for scambaiting related videos, and not that I’m making up a story to cover up my acts of blindly violating guidelines, please, reach out to me. I will happily prove that I mean what I mean. I still have some backups of the videos I’ve streamed onto YouTube, but it’s only a small subset of what has actually been streamed.

26 Sept 2021: First stream of this nature, worked well. Streamed almost every day ever since. (All unlisted)
30 Nov 2021: A stream from 27 Nov 2021 marked as violating “harmful and dangerous policy”. Warning only, no restrictions on account. I didn’t bother appealing.
14 Dec 2021: A stream from morning of 14 Dec 2021 marked as violating “harmful and dangerous policy” on that evening. First strike, live stream feature disabled for 1 week. I moved to a different platform along with my friends, didn’t bother to appeal.
14 Mar 2022: All strikes purged after 90 days.
20 May 2022: A stream from 13 Oct 2021 marked as violating “harassment, threats and cyberbullying policy”. Warning only. I didn’t appeal.
25 May 2022: Entire account got suspended. Reason given is “spam, scams or commercially deceptive content are not allowed on YouTube”. I wrote an appeal the same day given its severity.
26 May 2022: Channel unsuspended. “After taking another look, we can confirm that your channel does not violate our Community Guidelines.”
27 May 2022: A stream from 21 Oct 2021 marked as violating “harassment, threats and cyberbullying policy”. First strike. Account got suspended a minute later. Reason: “YouTube Creators share their opinions on a wide range of different topics. However, there’s a line between passionate debate and malicious harassment. Content containing targeted harassment including, but not limited to, stalking, threats, bullying, intimidation, unwanted sexualization, and sexually degrading language is not allowed on YouTube. Additionally, sharing personally identifiable information, or content that includes egregious insults based on personal attributes (such as protected group status or physical traits) is not allowed on YouTube. If you’re not sure whether or not your content crosses the line, we ask that you not post it. We review educational, documentary, artistic, and scientific content on a case-by-case basis. Limited exceptions are made for content with sufficient and appropriate context and where the purpose of posting is clear.” Appealed again.
28 May 2022: Appeal denied, so I appealed again.
3 June 2022: No replies from the previous appeal. Sent another appeal.
4 June 2022: Appeal denied. Tweeted @/TeamYouTube on the issue.
6 June 2022: Sent another appeal as asked by @/TeamYouTube. Appeal denied.
8 June 2022: Literally sent me a different format of e-mail to tell me that my suspension will remain.
9 June 2022: @/TeamYouTube confirms that my suspension will remain.
22 June 2022: This post.

You broke the YouTube terms of service by streaming a scammers screen without censor. Could of used a remote control program like team viewer where they could connect and see it that way? Since the reason (I believe) the YouTube videos are allowed of Jim and other people watching scammers is they censor things like victim and scammers info such as faces, names etc.

It’s true that there are other methods to share the screen, but this is what we’ve started with and it worked well at the time, so we’ve just sticked to this flow. Obviously it never crossed my mind that my entire channel can get wiped out of existence because of these. That said, I’ve stopped streaming since December, but the fact that they only take action of it at May, five months after I stopped doing so, just sucks, while they claim it to be “repeated violations”.

As for Jim, I’m referring to this paragraph in particular. (Jim is referred to as L. in the article)

L. told me that the remote access he had to Shahbaz’s computer went cold after I met with him on Dec. 14, 2019. But it buzzed back to life about 10 weeks later. The I.P. address was the same as before, which suggested that it was operating in the same location I visited. L. set up a livestream on YouTube so I could see what L. was observing. The microphone was on, and L. and I could clearly hear people making scam calls in the background. The computer itself didn’t seem to be engaged in anything nefarious while we were eavesdropping on it, but L. could see that Shahbaz’s phone was connected to it. It appeared that Shahbaz had turned the computer on to download music. I couldn’t say for certain, but it seemed that he was taking a moment to chill in the middle of another long night at work.

In the Mark Rober + Jim Browning + Trilogy Media collaboration, multiple scenes also show that they’re all watching Jim’s unlisted or private live stream on YouTube. The faces were not censored in the live streams, but only in their post-processed public video. Screenshot taken from Trilogy Media’s video. 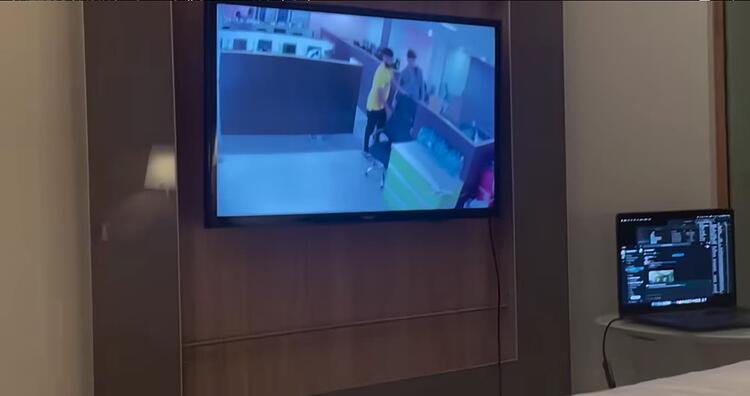 Jim and other people’s videos do censor faces and names in the public released videos, but for his unlisted streams, it wouldn’t make sense for Jim to have done live censoring on-the-fly.

I’m not trying to say something the likes of “if Jim can do it, why can’t I do it?”, I do take some amount of responsibility here. But suspending my account entirely, and banning me from the platform altogether, is overly severe for what I’ve done. I hate people abusing the platform for scam, spam, and misinformation just as much as everyone does, but getting banned for unlisted live streams is very unjustified for me, and nobody in the trust & safety team is willing to try to understand the context behind it.